From the 2.0 release, you are now able to incorporate GameDriver into your Play Mode UTF tests and build comprehensive integration and UI level tests as part of your CI/CD pipeline. With that support comes the full range of Unity-supported execution platforms, including Unity Cloud Builds.

Automated tests built with GameDriver are typically managed outside the Unity project, allowing you to build and test your automation library independently. With this update, you now have the additional option of including your tests as part of the same Unity project and build process, leveraging the tools build into Unity directly for execution and reporting.

Additionally, Developers and Testers can collaborate on test automation by introducing GameDriver into Unit Testing, and extend that effort through Functional/Regression Testing, and Build Verification Testing. This allows for greater collaboration and efficiency between teams, which will improve time to market, test coverage, and overall quality of your product. 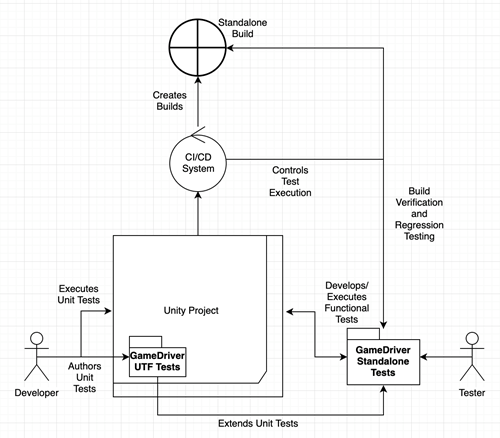 For more information on how to get started with GameDriver and the Unity Test Framework, visit our Support Site.